Many people have a preconceived notion that a female Pomeranian makes a better pet than a male.  They come looking to buy a "pretty little girl."  Like the bird species, the Male Pomeranian carries the most beautiful standoff coat that attracts onlookers and pom fanciers to the breed in the first place. Think of the male pom as a male peacock and a female pom like a pea hen.   The Male sheds some of his undercoat once per year usually in the spring, while the female does a large shed twice per year following her seasonal heats. 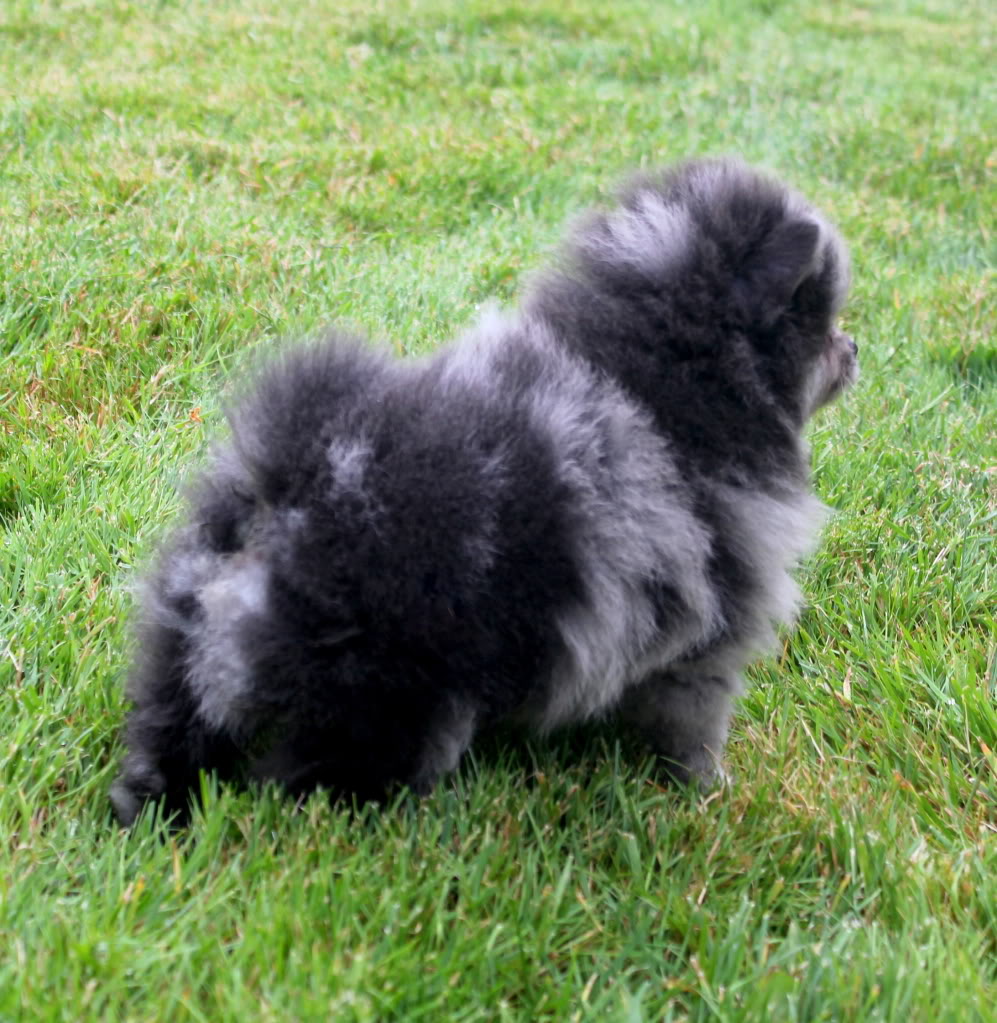 They believe or have been told that females do not display dominating behaviors like marking territory, humping and fighting.  They think a female will be more docile towards the kids and more attentive to their owner.  The truth is that we don't call female dogs "bitches" for nothing! In a wild dog pack, females rule the pack.  They determine the pecking order and decide who will mate and have puppies.  Females are more independent, stubborn, territorial, and are much more intent upon exercising their dominance by participating in alpha behaviors such as "humping."  Most fights will usually break out between two females.

A male puppy neutered around 6 months of age will rarely exhibit sexual behavior such as "humping" or marking.  Males are usually more affectionate, exuberant, attentive and more demanding of attention.  They are very attached to their family or person.  They tend to be more loyal, reliable and less moody.  They are more outgoing, more accepting of other family pets and take quicker to well behaved children.  Most boys are easily distracted during training, as males like to play more often no matter what age.  He is more likely to act silly and more puppy like, always wanting to play games.  Boys are fun loving until the day they die.  Females tend to become more reserved or dignified with age.  People can often be described the same way, Grandpa get's excited to play ball with the Grandkids while Grandma quietly observes from the kitchen window as she bakes cookies.

While the female will usually come to you for attention, when she's had enough, she will go about doing her own thing.  While boys are always waiting for your attention and like being around you all the time.  If you move rooms they do too.  Males really are the best company.

I personally find males are much more devoted and loving than females.  The female is less likely to wage a dominance battle with you, but she can be cunning and resourceful in getting her own way, which can make her much more difficult to house train.

I like to compare Males with Female this way.  The Female pom loves you and the Male is IN LOVE with you.

Females have a seasonal heat twice a year that lasts for 3 weeks.  If you are not breeding, you'll be best off to have her spayed since during this time she can leave a bloody discharge on your carpet, couch, bed or anywhere she goes.  She will be particularly moody and emotional due to her raging hormones at this time.  A walk outside during this period can become hazardous if intact male dogs are in the vicinity as she will leave a "scent" for wandering males to follow right up to your door step.  They will hang out for days and wait for that one chance to get her while she is unattended.  This usually happens when you turn your back on her for a second.

Males generally cost half the price to have neutered as a female to be spayed.

I hope this information has been helpful.  Best of luck with your new Pomeranian Family Member.

~By Erin Boyes, of vyrnpoms.com